skip to main | skip to sidebar

I want to give full credit to Geoff Wichert and say thank you for such an overwhelming review of this show.  You can follow this link to his website:  http://postgeoff.com/

It’s hard to talk about Jeff Pugh, a thirty-something Mormon husband and father who—no surprise here—paints the Utah landscape, without talking about the most fundamental questions a painter faces in setting out to make art, or for that matter the corresponding questions a viewer brings to the finished work. Most viewers—and most painters, for that matter—take for granted that a picture is abstracted, so in important ways unlike the full-size, full-color, three-dimensional original. embedded in its surroundings, that first caught the artist’s eye. For Jeff Pugh, though, that awareness is at the center of everything he does. Ever since as a child he sat at his grandmother’s knee and watched her paint, he has been sensitive to the distance that visual impressions must travel on their way from the real world, through the eyes, to become a skin of paint.

Perhaps it was seeing art being made first, before he’d got to know the product, that led to his fascination with what he now calls ‘filters and abstractions.’ These terms refer to techniques and their results that he says necessarily separate the painting from its source. The best way to get at what he means is to list a few examples. When Pugh paints a field, it will have three horizontal bands. The lowest will be the foreground, which will be sharply delineated from the middle distance above it, and that in turn will be clearly distinguished from the distant sky. How he separates them reveals a lot about both the landscape and how we learn to experience it. Pugh will arrange to show his mountains at the time of day when they form vertical stripes, like ribbons, alternating dark shadow valleys and light-struck ridges. Structures, whether natural or man-made, will display underlying skeletal facts: barnes and houses are made of geometric solids, while the foliage of trees is closer to stones or crystals. Each marks the intersection of an intention with the accidents of carrying it out.

The title of this show, Modern Tradition, could be an oxymoron: a witticism meant to call attention to a new treatment of an old subject. ‘Modern’ usually implies the discarding of tradition. But in art, ‘modern’ can also mean ‘from the early twentieth century.’ It’s the photographers from that time, and the painters they influenced, that inform Pugh’s paintings, which offer shadows that look like lightning bolts, clouds like automobile hood ornaments, and trees that Brancusi could have sculpted. These elements are visible in ‘Storage,’ which primarily employs a smooth paint application, except where brush strokes in the foreground mimic crop spikes. Once tuned into what Jeff Pugh finds important in the subjects he feels drawn to paint, his choices of color, texture, composition, and so forth, and the relationships he creates between his images and the places they represent will offer viewers much to explore, ponder, and enjoy.
Posted by J BOB at 4:31 PM 3 comments 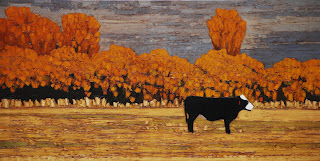 Other Artists I Dig